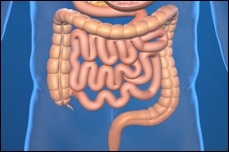 Colectomy is the most common procedure performed to remove the cancer cells. It is the surgical resection of all or part of the large intestine. It is also called large bowel resection. Colectomy is performed under general anaesthesia by open surgery method or by laparoscopic method. The procedure takes about 1 to 4 hours.

In this technique a single large incision of about 6 inches is made in the lower abdominal wall. The diseased part of the colon is removed and the healthy ends are sutured. If no healthy large intestine is left, an opening or a small incision called a stoma is created on the abdominal wall. The open end of the large intestine is stitched to the skin of the outer wall of the abdomen. Wastes will pass through this opening into a bag that is attached outside the body. This procedure is called colostomy.

It is a minimally invasive technique where several small incisions are made rather than one large incision. Three to five small incisions are made on the lower abdomen. A laparoscope, a telescopic video camera is used to see the inside of the abdomen, is inserted through an incision. Small surgical instruments are passed through other 2 incisions and colon is removed. Carbon dioxide (CO2) gas is filled in the lower abdomen and expanded for easy access and the diseased part of the colon is removed. The healthy ends are reattached and all the incisions are closed with the sutures.

Complications of colectomy procedure include infection at the site operated, bleeding, and damage to nearby organs.

Some of the ways to prevent the colon cancer include high fibre diets and vitamins, avoid smoking and alcohol consumption, lose weight in case you are obese, and a healthy life style can lessen risk of colon cancer.

Haemorrhoids are masses or lumps formed due to swollen blood vessels inside or outside the rectum. In severe stages, they may become infected or protrude from the anus (prolapsed haemorrhoid) and require surgical removal. The procedure used to treat or remove haemorrhoids is termed Haemorrhoidectomy.

Haemorrhoidectomy is performed under general, regional or local anaesthetic depending on the procedure. The different types are:

The word pilonidal means a nest of hairs, and a sinus tract is an abnormal narrow channel or cavity in your body. Pilonidal sinuses are infected tracts beneath your skin that predominantly occur at the end of your tailbone, an area called the natal cleft where the buttocks separate.

The exact cause of pilonidal sinus is unknown. It is believed that ingrown hairs combined with changing hormones (pilonidal sinuses occur after puberty), friction (sitting for a long time or from clothing), and infection (ingrown hair and friction can irritate the skin and cause inflammation leading to bacterial invasion) contribute to pilonidal sinus. Having a sedentary job which requires a lot of sitting, obesity, having a deep hairy natal cleft, or a family history of pilonidal sinuses can make you more prone to this condition.

A pilonidal sinus may not have any symptoms at first or can start off as a small painless lump. Once it is infected, it becomes inflamed, fills with pus and develops into a painful cyst. Over a few days you may experience symptoms like:

The symptoms can be rather quick in onset once infection occurs. Pain can be severe and may be experienced whether sitting or standing. Pain can affect your ability to perform your daily activities and can worsen without treatment. Discharge of pus usually releases the pressure and eases the pain, but if the infection is not treated, it can lead to recurrence of the pilonidal sinus.

When you present with symptoms of a pilonidal sinus, your doctor will perform a detailed physical examination. You will be asked for your medical history, which would include information regarding any drainage or change in appearance of the affected area. Your doctor will perform a visual examination to look for tenderness, redness, swelling and inflammation around your affected area. Your doctor may also order a blood test to check for increased white blood cells, which may be an indication of an infection. In rare cases, your doctor will recommend a CT scan to confirm on your condition. Your doctor may conduct tests to rule out other conditions such as a dermoid cyst (tumour of the germ cell) that can resemble a pilonidal cyst.

Treatment may not be necessary if your pilonidal sinus does not become infected. The area can be kept clean and dry, and the surrounding hair removed by shaving or with hair removal creams. However, infected pilonidal sinuses are treated with surgery. Your doctor may perform any of the following procedures:

For recurrent infections of your pilonidal sinus, you may be recommended to undergo surgery to remove the sinus and prevent further infections with any of the following procedures:

The intestine, a part of the digestive tract, is a long continuous tube, extending from the stomach to the anus consisting of the small intestine, large intestine and rectum.
The small bowel(intestine) which is about 20 feet long and 1 inch in diameter is the largest part of the digestive tract that is divided into three parts – duodenum, jejunum, and ileum. The small intestine folds several times to fit inside the abdomen and plays a vital role in digestion of food and absorption of nutrients and water from the digested food into the body.

There are a number of diseases that can affect the function of the small intestine. Some of these include:

The types of symptoms depend on the condition affecting the small intestine. However, a few common symptoms include nausea, abdominal pain and cramping, rectal bleeding and weight loss.

Small intestine disorders and other common diseases share some common symptoms making the diagnosis difficult. However, along with a detailed history and physical examination, a few tests may be performed that include CT scan, barium enema X-ray and capsule endoscopy.

While a few conditions of the small intestine like inflammation or infection can be treated with medicines, obstructions or cancer usually require surgery. Small intestine surgery can be done using one of two methods:

The potential risks and complications of having small intestine surgery include:

Lymph nodes are the small kidney shaped structures which are the sites for formation of body’s defense cells lymphocytes. Lymph is a clear fluid that flows through lymph vessels and lymph nodes. The interstitial fluid (fluid found between the cells) bathes all the cells and carries excretory products, bacteria and viruses from the cells and helps remove them from the body’s tissues.

Gastric cancer treatment depends on the type and the stage or spread of the cancer. Your age and general state of health is also important consideration by the doctor in determining the treatment modality. Treatment involves surgery, chemotherapy and radiation therapy. Surgery is the most common treatment for gastric cancer.

Possible complications of surgery for stomach cancer include bleeding, formation of blood clots, and damage to nearby organs. You may also develop frequent heartburn, abdominal pain (especially after eating), and vitamin deficiencies.

After the surgery follow up is very important since the recurrence of the disease is a possibility. In case of any suspicion the doctor will ask for certain tests to confirm his findings. Absorption of vitamin B12 occurs through upper part of the stomach. If upper part of the stomach is removed by surgery Vitamin B12 levels are closely monitored and Vitamin B12 injections are given when required. The doctor may refer you to a nutritionist to plan your diet and you need to eat more often and small meals as the size of the new stomach is small.

Acid reflux, also called gastro-oesophageal reflux disease (GORD), is a condition where the stomach contents (food or liquid) rise up from the stomach into the oesophagus, a tube that carries food from the mouth to the stomach.

Heartburn is usually the main symptom; a burning-type pain in the lower part of the mid-chest, behind the breast bone. Other symptoms such as a bitter or sour taste in the mouth, trouble in swallowing, nausea, dry cough or wheezing, regurgitation of food (bringing food back up into the mouth), hoarseness or change in voice, and chest pain may be experienced.

The exact cause of what weakens or relaxes the LES in GORD is not known, however certain factors including obesity, smoking, pregnancy, and possibly alcohol may contribute to GERD. Common foods that can worsen reflux symptoms include spicy foods, onions, chocolates, caffeine containing drinks, mint flavorings, tomato based foods and citrus fruits. Certain medications can also worsen the reflux.

There are several tests that can be performed to diagnose acid reflux and they include:

Antacids are over-the-counter medicines that provide temporarily relief to heartburn or indigestion by neutralizing acid in the stomach. Other medications such as proton pump inhibitors and H2 antagonists may be prescribed to reduce the production of acid in the stomach.

Surgery may be an option for patients whose symptoms do not go away with the medications. Nissen’s fundoplication is a surgical procedure in which the upper part of the stomach is wrapped around the end of your oesophagus and oesophageal sphincter, where it is sutured into place. This surgery strengthens the sphincter and helps prevent stomach acid and food from flowing back into oesophagus.

Endoluminal gastroplication or endoscopic fundoplication technique requires the use of an endoscope with a sewing device attached to the end, known as EndoCinch device. This instrument place stitches in the stomach below the LES to create a plate which helps reduce the pressure against the LES and help strengthen the muscle.

General measures the patient can take to reduce reflux are:

Splenectomy is the surgical removal of spleen, a large organ located in the upper left part of the stomach that contains macrophages, specialized cells that fight against the foreign bodies. Splenectomy is indicated in splenomegaly, a condition of enlarged spleen. Patients with splenomegaly may or may not exhibit the symptoms and will be diagnosed by the physicians by physical examination or radiological diagnosis. The common symptoms include abdominal pain, hiccups, unable to have a large meal, weakness, fatigue, frequent infections, and severe bleeding.

Splenectomy may be performed by open surgery or laparoscopic procedure.

Some of the complications include bleeding, wound infection, pneumonia, and injury to other structures.