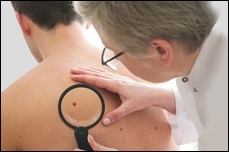 Skin cancer is one of the most common forms of cancer affecting people across the globe. Cancer, also called malignant neoplasm, occurs when cells in the body divide uncontrollably. Cancer cells develop when the genetic material in the body cells is damaged and the body is unable to repair this damage. These damaged cells divide and multiply uncontrollably forming a tumour mass. Uncontrolled division of skin cells is called skin cancer.

A biopsy is performed to obtain pieces of tissue that are sent to the laboratory for examination of signs of cancer or other diseases. The biopsy sample is stained and examined under a microscope in the lab. This close examination allows the laboratory technician to determine if the sample is normal, part of a non-cancerous or benign tumour, or part of a cancerous or malignant tumour.

Types of surgery to treat skin cancer include:

Curettage and desiccation – Curettage involves scooping out the cancer mass with the help of a spoon-like instrument called a curette. Desiccation is then done by applying an electric current to control bleeding and kill the remaining cancer cells.

Cryosurgery – In this technique, liquid nitrogen is applied to freeze and kill the abnormal cancer cells.

Mohs micrographic surgery also known as "microscopically controlled excision”, in this method the surgeon removes a small piece of the tumour mass and examines it under the microscope during surgery. The procedure of removing and examining continues until the cancerous growth is removed and skin sample is free of cancer cells. It is preferred for large tumours that recur after previous treatment.

Skin grafting – Skin graft is a thin piece of skin taken from another less obvious part of the body such as inner thigh or even behind the ear or neck to match the colour. The skin graft is then put over the place which needs to be reconstructed. Dressing is done to press the graft to the underlying layer for its blood supply. Care should be taken while the graft attaches to the underlying layer and the area heals. To prevent infection antibiotics are prescribed. The new skin at the donor site grows within few weeks. Initially the graft looks of a different colour as the face or neck but slowly its colour fades and matches with that of its surrounding.

Skin flap repair – Skin flap is a thick flap of skin with the underlying subcutaneous layer supplied with blood vessels and nerves. It is used for the reconstruction of large and deep wounds. The flap is taken from the adjoining area and is still attached to the donor site from one side as in a flap to maintain the blood supply to it. It is then stitched on the wound. Even the donor site is also closed with stitches. Reconstruction involving flap is little complicated as compared to a skin graft and requires a longer stay in the hospital but gives better results.